Gold in packaging innovation for the BeeMagicTray

Packaging Innovation Contest De Gouden Noot 2014 has been won by the BeeMagicTray, a ground breaking solution for packaging fresh meat. The winner was announced during the 10th NVC Packaging Innovation Dinner on Tuesday 30 September 2014 in the Holland Casino Utrecht, The Netherlands. 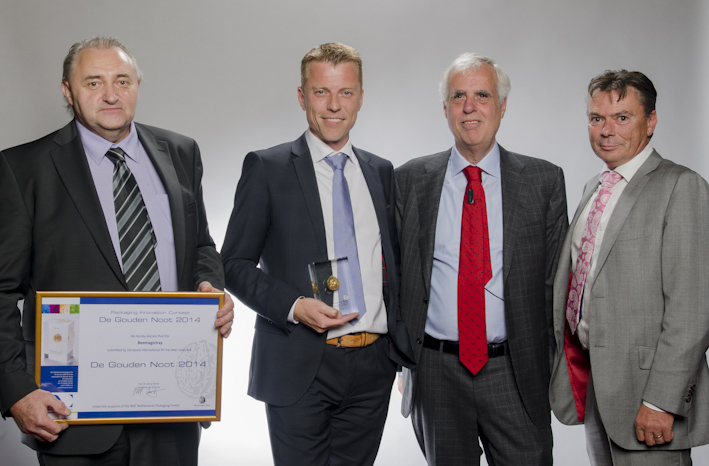 De Gouden Noot is the world’s most competitive packaging innovation contest. With De Gouden Noot the NVC stimulates innovation of packaging and packaged products. Winning brings a wealth of international publicity and acknowledges the work put into the packaging. The unique trophy with a solid golden walnut is the symbol of the contest.

The Kick-off of the 27th edition took place on 2 October 2013 in the Atomium in Brussels. On 8 and 9 April 2014 the first jury round took place. Here the jury could discuss all the entries with physical samples available. In the second judging round, on 10 September 2014, the jury decided which entries won the Bronzen (bronze), Zilveren (silver) or De Gouden (gold) Noot. In this round the submitter was given the opportunity to present his/her entry in the presence of the jury.

Chairman of the jury, prof. Onno Omta, about the winner: “The Gold goes to a consumer pack with possibilities unthought-of. An ancient physics law was rediscovered and made it possible to create a very simple pack in a market where complexity has been the standard. That means Simplification through Innovation! It is a tray for meat products, that thanks to this innovation also gain longer shelf life in the supermarket and the refrigerator at home. The tray is suitable for modified atmosphere packaging (MAP) and makes the traditional moisture absorbers obsolete. The magic is in the honeycombs in the bottom that retain the moisture, because they act as capillaries. The traditional moisture absorption pad in the conventional meat trays does not have to be used any longer. All considered together this pack contributes both to food safety and hygiene of meat products.”

The Zilveren Noot (Silver) went to the Locked4Kids blister pack, a breakthrough in the field of child resistant medicine packaging. The central question was: what can’t small children do that adults cán do? This apparent contradiction has been solved by this concept in a very elegant way.

The Bronzen Noot (Bronze) was for the SpRing Latch, a packaging innovation for the market of paints and chemicals, a market using over 60 million barrels worldwide. A smart ring latch with an integrated spring makes it possible to automate closing the can and also allows easy opening.

The winners of Gold, Silver and Bronze and the other seven Finalists can be admired at the NVC-stand at the Macropak exhibition (Utrecht, The Netherlands, Hall 2, stand 020) and on the NVC-website.

The entry for the 28th edition has now been opened. Contact Ger Standhardt, NVC manager Knowledge Development and Innovation Projects for more information and the entry form.